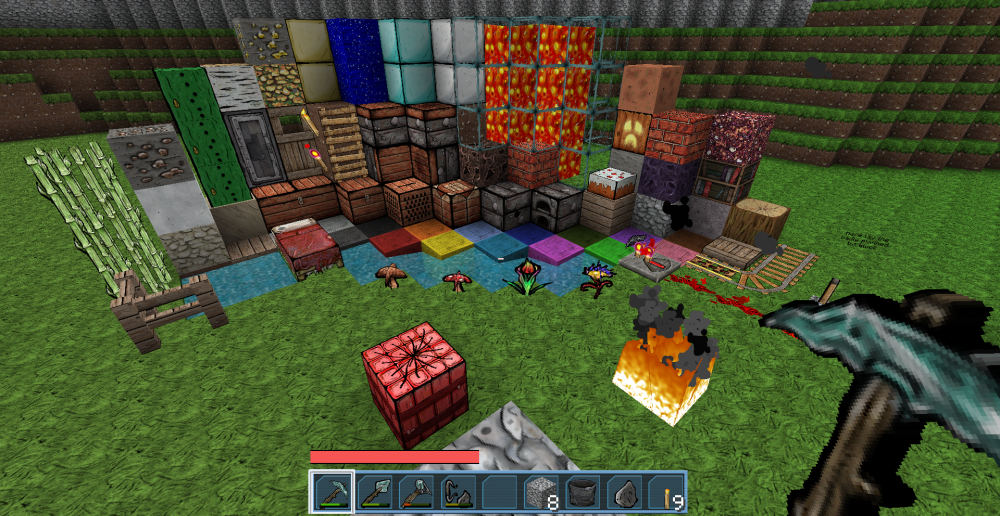 Hello there, so this is my first post to MMGaming – in the near future I guess my role will probably be something along the lines of “minecraft correspondant”. So… i’ll be testing out and reviewing different aspects to minecraft, not to mention trying to keep up with the many minecraft developments – So much is happening!!

Up until recently i’ve beeen pretty set in my ways – mining out copious amounts of diamond, redstone and iron then using the thousands of blocks gathered to make pointlessly large and often worryingly sad buildings, devices and battleships. What of it you say? Isn’t this the point in minecraft? Isn’t this what’s fun about it? Well i’d say yes, you are partially right… But I put this to you. Why do something over and over again?…. If you can do it over and over again in HD instead!!

So recently I started looking into minecraft texture packs. I’d always been pretty happy with my highly customised Painterly pack, including icy cobblestone, chocolate cake and tinted red glass. But taking up an hour after each patch to re-tweek and update the Painterly pack wasn’t the best use of my time…after all – I could be busy mining fake diamond! So I decided to look into some more packs, see if any came up trumps. I started with some relatively simple 16 x 16 texture packs (for those of you not acquainted with texture packs – this means 16 pixels in each direction on the face of the cubes). Amongst these ones were Frenden, Jollycraft and Good Morning Craft. Now I must say, I had mixed feelings about these, I did like them, but – especially with Frenden – I felt they were a little too plain.

So I decided to step thing up a notch… no pun intended – well, only a little. Anyways, I looked into some 32 x 32 texture packs (meaning to effectively double the resolution as there would be twice as many pixels on each plane). I happily downloaded the Doku texture pack, unzipped its contents to my texture pack folder then proceded to play. To my horror, as I walked through the world I realised something was wrong. Instead of the firey lava and cool blue water i’d been promised… it was solid white with something written across it. It said “noob noob noob use the patcher”. I hastily retreated to the download page and proceded to read the instructions much more carefuly. So now that I had learnt how to use hd texture packs I looked into more – I did like Doku Craft, but it was far too dark, almost as if someone had made an awesome texture pack, then just greyed it out… Due to my love of all things Borderlands, I tried out Bordercraft – which quite frankly blew me away – absolutely fantastically made with the cartoon-style black outlines and the holographic-blue inventory, to my dissapointment though – the pigs were not skags.

However I could not stop here after coming so far. I held my breath as Misa Realistic 64 x 64 downloaded, patched and then loaded up. But my fears were unfounded, it ran like a dream, though I would say, you need at least a semi decent computer to run it. As the world loaded up my jaw dropped, the difference was astounding – you could see grass – real grass not just green mush, and the inventory was full of recognisable shapes not purely blurry outlines. This was more like it. But no, I still had further to go, I had to try new things – for science. Next came LB Photo Realism 128 x 128. The difference again – unbelievable! Even compared to even Misa’s, this was something else and it still ran like a dream. Though i’d like to point out that you do need a medium to high end computer. My laptop ran them fine though so it’s not only desktops.

There was only one more step to take now. I downloaded LB Photo Realism 256 x 256 and High Detailed Photo-Realistic Texture Pack 256 x 256. (The names do get less exciting dont they). Now these were truly amazing texture packs, the detail up close and on tools was noticeably improved, but i felt, there’s really only so far you need to go, the only difference between these and the 128 ones was at very close distance, and honestly – I dont stare at diamond ore for all that long in minecraft. Also though, my computer was at last begining to show some fatigue – at 16 times the resolution of normal minecraft and far render distance (because honestly why play in fog?) – my computer did occasionally freeze up. So I reverted to 128 x 128, finally downloading the high resolution Bordercraft and it was amazing. I’d tried and tested plenty of realistic high detail packs and I settled on 128 x 128 bordercraft – a hybrid of two of my favourate games, brilliantly designed, amazingly detailed and just generally fun. I would recommend this to any and all, as well as the almighty Minecraft itself.

Now excuse me, I’m off to get me some pork chops.