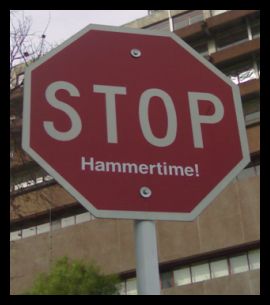 Okay so maybe I exaggerate a teeny-tiny bit in the title. I swear I gave the final game (well last of the original’s anyway) in the Humble Indie Bundle a good go. Honest, guv!

Created by Kranx productions in Hammerfight you control a tiny, hovering… thing… let’s call it a “ship”. And to this ship your in game character attaches weapons and other less interesting bits and bobs. Okay, the main part of it is that there are weapons on the ship. Melee weapons! The idea is that, using the mouse to fly your ship in circles, you make your weapons swing round the ship, building up momentum and then you try and get the weapons to smash into other ships.

In the back-story the ships can supposedly be used for a great many things, but nobody really cares about that, we’re here for the hitting. And you know what, it is pretty cool. There is a lot of destruction and smacking and “Leeroying” (or as Tim would say “Demacia-ing”) and basically it seems like a bit of senseless fun. Plus it actually looks pretty damn cool as well, the graphics are well done, the animations are smooth and the environments are detailed and to put it simply: nice.

Also on it’s plus side, the music isn’t really noticeable (or I didn’t notice it anyway) because like the clever game designers that they are, the creators made the music a part of the overall experience of the game rather than over-powering or annoying.

Unfortunately, unlike every other game in the Bundle. I really am not overly fond of Hammerfight. And the feeling is not simply me being picky. Both Tim and Dogbert didn’t get far in the game describing their irritation with the controls and the difficulty and so they passed it onto the last guy to say “not it”.

For, the unique and interesting control system in Hammerfight is what lets it down. And on a major scale. I like the idea, don’t get me wrong, of using only the mouse to move and the unique “spinny-weapon” system. But ideas can prove flawed when put into practice. The game proves irritating and unbelievably tricky. Your wayward ship flies haphazardly about the maps with you spinning your weapon for all your worth, only for you to miss your opponent by inches. And then you crash into your opponent, ultimately dealing more damage to you than to him.

Now you would think that, because the enemy ships are very similar to yours and actually seem to have as much difficulty hitting you as you have hitting them, the game might not be TOO hard. But you’d be wrong. The enemy ships can at least fly fairly straight about the place (such is the benefit of a computer driven AI) and swing their weapons. Combine this with the fact that controlling your own ship’s movement can be rather tricky and your movement is often haphazard and jerky you often (in your attempt to escape/block/fight-back against the enemy) smash into the enemies weapon, and then in a desperate attempt to get away you crash into the nearest wall. And this happens ALL too often.

I repeatedly got stuck in the early stages of the game and came very close to giving up in disgust on more than one occasion. But I soldiered on.

Really though, I did not get very far before I became bored of trying the same levels over and over again and failing in the same ways again and again. And so, to my shame I quit. Ah well, whatcha gonna do?

In my defence there are a few other problems as well. One is the story, it’s difficult to follow and to know what’s going on and who’s attacking who at the various stages of the game I played, and so after a while I simply started ignoring it. Never a good sign for a story.

So it is a nice idea, and well designed. But unfortunately, I simply do not like it. It is too difficult and too irritating. The only let down of the Humble Bundle. At least the others more than make up for it.

Speaking of! Unless you have decided you want to buy this pack of awesome at the last second then I’m afraid to say that probably by the time you read this the Humble Bundle will no longer be available. In fact as I publish this there are only two hours left on the clock. If you are one of the intelligent 366,000 people who bought the Bundle, I salute you good sir/madam! If not, then I guess you have to wait until the next one. I can’t wait!