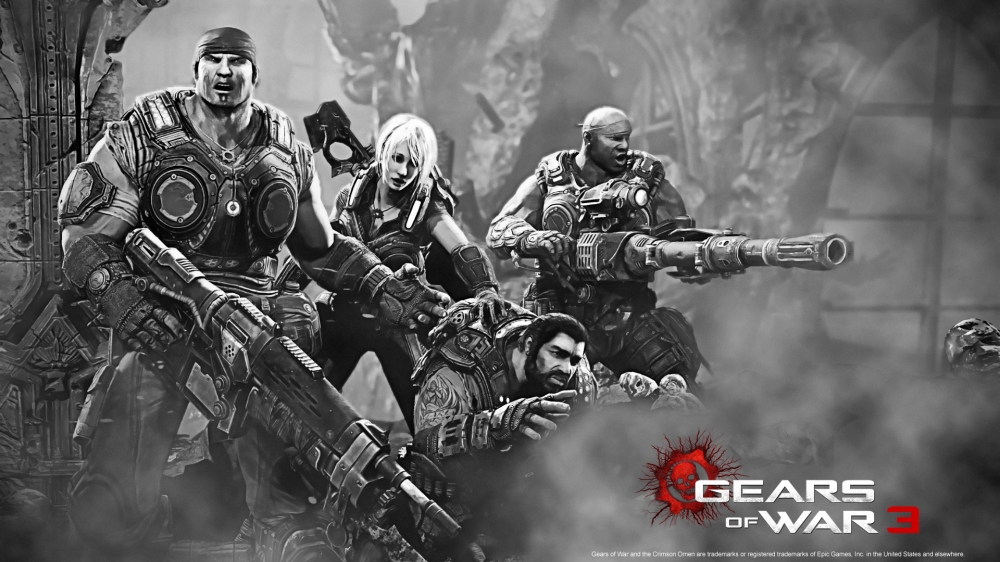 If you read much MMGaming at all you might have read my dairy of mine and Ali’s playthrough of Gears of War 3. If you haven’t but would like to you I will put the links to the various days at the bottom of this post. If you have read them then this actual review of Gears of War 3 contains a lot of the sentiments and thoughts that I mentioned in the diaries. I’ll try and avoid repeating myself too much, but it is going to happen. Consider yourself warned.

Of course I will also be talking about the other aspects of Gears of War 3 after I have talked about the campaign, so you might want to skip down to that!

Well… where to begin? The gameplay of the Gears campaign remained fun and well put together for the whole game. Gears was and always will be a solidly put together game and a prime example of shooters. The graphics still look really good (probably due to a vamp up that isn’t really noticeable except in the fine detail) especially the cut-scenes, more than one of which really impressed me. The campaign is also split up into nice little segments, a bit of running and gunning followed by a base defence or a vehicle mission. And personally I enjoyed the boss fights as well.

Over all it is a great game. Unfortunately there are little problems. The voice acting is at times pretty irritating and ranges from wooden to emotionless (not all the time admittedly, at some points the voices are good, but at others… not so much). The dialogue itself is often even more irritating, with the banter between the Gears being, for a large part, not funny or just plain stupid. The flow of the game was at times ruined with small unnecessary cut-scenes involving talking between the Gears or opening a door. Also some of the boss fights were a bit on the ridiculous side. I do think that when it comes to fighting Corpsers or Brumaks that gunning them down with the normal COG lancer is a bit stupid, and that killing those sort of things should rely on some other means of fighting (the Hammer of Dawn for instance). Also some of the fights were just ridiculously easy or repetitive and so not as enjoyable as the others.

The most annoying part of Gears of War 3 I would say is the story. It’s convoluted and difficult to follow, and more often than not you are offered no explanation as to what is going on or why what you are doing is important. Basically it was a bit of a fail for the team at Epic. At least the ending itself was satisfying and awesome, if a lot of the rest of it wasn’t. I won’t say it was all bad though, there were a few moments in the story that definitely struck me as moving and well done… but not a lot of it.

There were a few other bits and pieces that were a cause of annoyance, for example: one chapter you are placed in a turret in a submarine with a completely 3-D field of vision. Unfortunately this field of vision is ridiculously disorientating and finding out which way is forward and backwards even is a challenge. However, on the whole I did enjoy the Gears campaign and I reckon that I will probably play it again on Insane at some point in the near future (I won’t be making a diary of that though).

As to the other parts of Gears of War… The new Beast mode was an interesting idea, but playing as the Locust quickly gets very boring. You are either overpowered or completely underpowered and useless. Plus it just gets a bit boring fairly quickly. I can imagine with four people you could easily entertain yourself with it for a while, but it’s not something I would ever go out of my way to play.

The new Horde is very good. Epic actually took what they had from the Horde mode in Gears of War 2 and improved upon it, while keeping much of it the same. The addition of money allows you to build defences and it is necessary to buy the power-weapons rather than simply being supplied them. Also there is now a boss round every 10 rounds which seems like a really cool idea, if probably ridiculously difficult (ever tried fighting a Brumak in Horde? It’s hard, trust me). So that is a definite point in Gear’s favour.

The multiplayer is also pretty damn good. Despite me insisting I wouldn’t play the online multiplayer on day 5 of my diary I have actually had a wee go with Ali. To my horror I am pretty much fucking useless at it and all my skills from the previous Gears seem to have gone down the drain. On the other hand it is great fun and is well put together (Epic can do that at least it seems). I will probably over the coming months spend a fair amount of time on the online multiplayer as me and Ali have been on the lookout for a good multiplayer to play together since we got bored of Halo, and so you never know, I might get good at it.

Over all Gears of War 3 is a pretty great game. I enjoyed most of it immensely and all of the extra multiplayer bits and pieces are all pretty diverting as well. However, while it does a lot of stuff well, Gears of War 3 is just not as good as I was hoping it would be. I am something of a fan of the series and so might well be a bit lenient towards it, but I will say that more than once I found myself bored, or thinking “this is stupid” while playing various parts of it. It’s a massive shame because I was hoping for an awesome finale, something that would finish off the Gears of War trilogy and send it out with a bang. While Gears of War 3 certainly finishes well, it simply didn’t have that awesome feeling throughout the game. So while I liked it, I was really disappointed with it. It was simply not the game it should be.

I was hoping Gears of War 3 would be an A in our rating but the best I can make myself give it is the following:

2 thoughts on “Gears of War 3: Brothers to the End”